Everything you need to know about the 2018 Ryder Cup

The Ryder Cup is a golf trophy created in 1927, bequeathed by Samuel Ryder, which rewards every two years the winner of the tournament which opposes by team since 1979 Europe and the United States. The competition is jointly administered by the PGA of America and the PGA European Tour and is contested alternately on European and American courses.

The 2018 edition will take place from Friday September 28 to Sunday September 30, 2018 at the Golf National de Saint-Quentin-en-Yvelines. 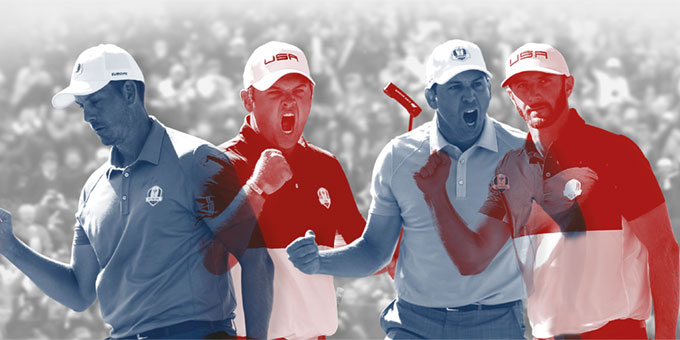 What is the Ryder Cup?

The Ryder Cup is the biggest golf competition in the world, both in terms of the level of players (the 12 best American players against the 12 best European players), and by the notoriety of the event (3rd largest sporting event by its media coverage, nearly 5000 hours of broadcasts in 185 countries, nearly 400 million households reached, and by the number of spectators, more than 300 spectators during the week, 000 spectators per day. 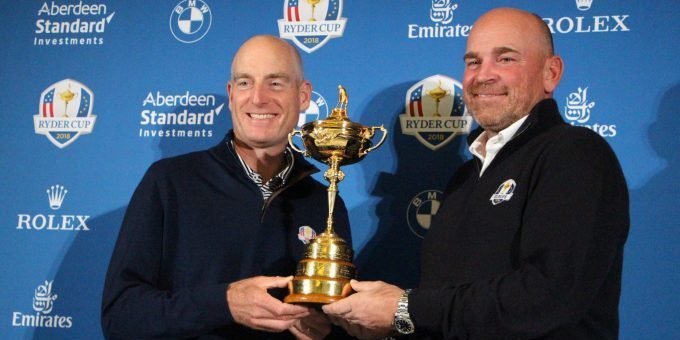 A victory, and even already a selection in Ryder Cup is the grail

Ryder Cup player is one, if not THE most prestigious status on a player CV, synonymous with the excellence required to qualify. For the two captains, who also take immense pride in being chosen, the selection of the 12 players is done on a long process of points won on tournaments, taking into account the form of the best players in the world as close as possible of the event, of their qualities to play these three days of matches in direct confrontation and in team.

The three days of matches, either in teams of two or in singles, are played in match play. This formula of direct confrontation, where everything is played on each shot, each hole, electrifies the atmosphere, and makes the course a real stadium! And you don't need to have already touched a club to share the emotions of these three days, where the two teams fight until the last moment, the history of the Ryder Cup also shows some spectacular twists and turns!

Three days of matches but one week of shows

These three days will already delight all fans! Player training, entertainment, informal matches with celebrities, former captains, players from the two Junior Ryder Cup teams, the two exhibiting villages, and the opening ceremony that will give chills to all fans, already ready to chant Europe or the USA during the three days of the match… even if the concert the day before will have kept them awake a little too late.

On Thursday evening the team compositions for the first matches are revealed. The sporting excitement will not end until Sunday evening, and the curtain falls for the closing ceremony. 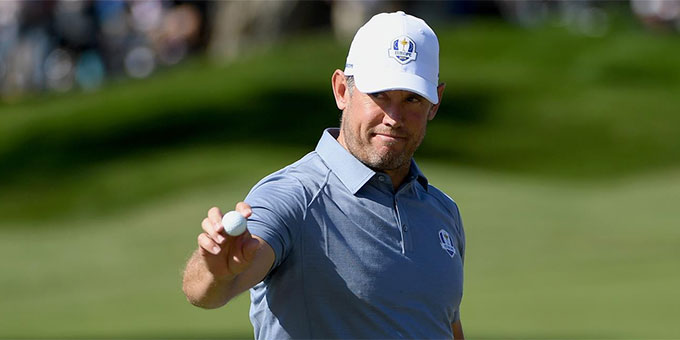 This is not golf, this is the Ryder Cup!

This is how our Anglo-Saxon friends define it! No doubt for all the reasons mentioned above, and perhaps also because the players win nothing other than the Trophy, the honor of winning the cup for Europe or the United States! 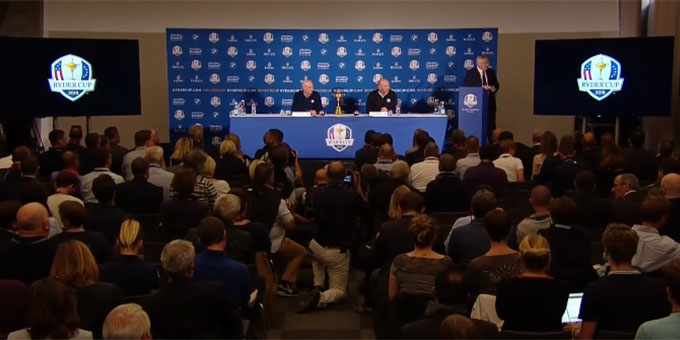 12 players. Eight selected on the basis of points won on tournaments played upstream over a defined period (two rankings to follow). Four players at the captain's choice. We will know the European team after September 3.

12 players. Eight selected on the basis of points won on tournaments played upstream over a defined period (only one ranking to follow). Four players at the captain's choice. The players' announcement will be spread out between August 12 and September 9. 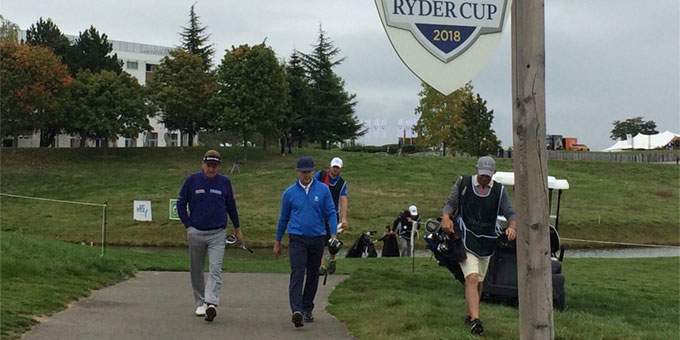 The match play, the four balls, the foursome, the singles ...

Understand the Ryder Cup formula to follow the matches with even more intensity.

Match play or direct confrontation between two players or two teams, which is played on each hole!

Up, down square ... at each end of the hole the mark establishes the position of the match

Victory of the first hole for Victor = 1up for him; of the 2nd = 2up; loss of 3rd = more than 1up for Victor; loss of 4th, he will find himself "square" with his opponent, tied; Paul wins 5th, Victor is now 1 down ...
And so on. If there is a tie on the hole between the two singles players or the two teams of two doubles players, the hole is “split”, the mark does not move.

The match ends if the led player does not have enough holes to play to be able to go back to the score. Victor, led 2 up at the end of the 17th hole, winning the 18th, would still be 1 down with no more holes to play. He loses the match. 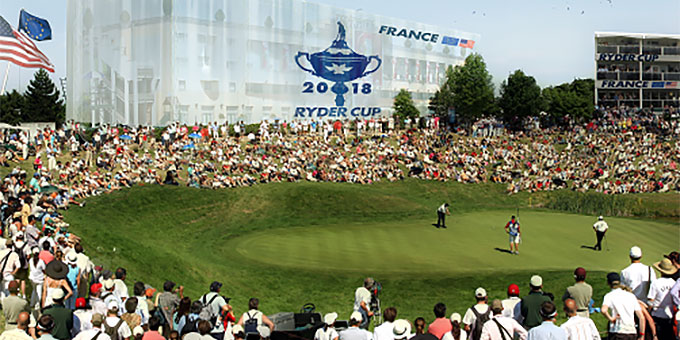 Four balls best ball: each member of both teams plays their own ball. The team which signs with one of its two players the lowest score on the hole, wins the hole (see above up, down, square).

Foursome: the two players of the same team play a single ball, alternately, from the tee to the hole. Before starting the match, the two players decide who will start the even holes, and therefore the other the odd holes). They therefore play the same ball together and the team with the lowest score wins the hole.

At the end of 28 games, the team which reaches or exceeds the score of 14 ½ is declared the winner 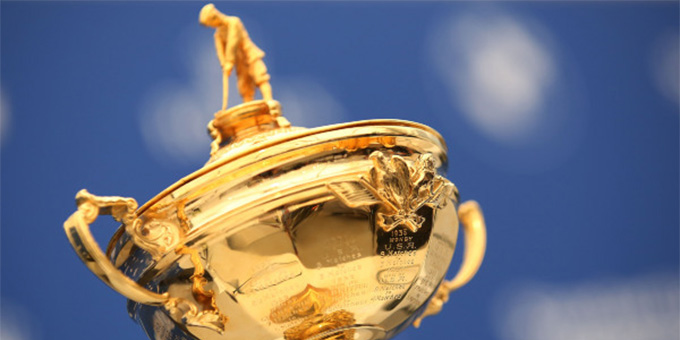 For nearly a hundred years, the Ryder Cup has been rocking the golf world. From the vision of a seed merchant in the 20s, through the opening given to him by the great Spanish champion Severiano Ballesteros at the end of the 80s, and until this year when the Ryder Cup, in France, at the Golf National, makes its only second stop on the European continent (after Spain in 1997) the Ryder Cup has written among the most beautiful pages in golf history.

It all started with an informal match in Scotland at the King's Course at Gleneagles, pitting the top 10 Americans against the top ten for Great Britain. Five foursomes, and ten singles, and a clear victory for Great Britain by the score of 10,5 to 4.5. On both sides, names that have marked the history of golf, such as James Braid, Harry Vardon, JH Taylor for Great Britain, Walter Hagen for the American camp.

The last informal match between these two camps will be played in 1926 at Wentworth.

Samuel Ryder, the trophy, the formalization of the matches

The Englishman Samuel Ryder, a seed merchant by trade and who had started playing golf at the age of 50 and almost on a medical prescription ... responds favorably to the requests made to him to offer a Trophy and to formalize these matches. The famous Trophy will be topped by the silhouette of Abe Mitchell, his private teacher.

The first official Ryder Cup was contested in 1927 at the Worcester Country Club in Massachusetts and ended with a victory for the United States 9 1/2 -2 1/2.

Hagen, founding member of the American PGA, was the first American captain, Mitchell was to be the first captain of the Great Britain team, but could not fulfill his mission due to illness, and was replaced by Ted Ray.

After the interruption of the matches during the 2nd world war, the resumption takes place in 1947 at the Portland Golf Club in Oregon.

Another hiatus will come in 2001, the Ryder Cup scheduled eight days after September 11, was postponed to 2002.

In 1971, John Jacobs, first general manager of the European Tour, foresees the development and the growing internationalization of the pro circuit and envisages as a next and normal step that European players are integrated into the selections.

In 1973, the Ryder Cup took place for the first time in Scotland, at Murfield, and the PGA of Great Britain modified its selection procedure: 8 players selected mathematically, 4 at the captain's choice.

In 1977, at Royal Lytham & St Annes, the American Jack Nicklaus alerted the PGA of Great Britain to the importance of reviewing the level of competition and opening the selection process.

In 1979, the Ryder Cup became a Europe v United States confrontation, the Spaniards Severiano Ballesteros and Antonio Garrido were the first players from continental Europe to participate, a new era began and the prize list began to suffer some upheaval ... .

1997, first and only Ryder Cup to date on the European continent

In Valderrama, in Spain, Ballesteros takes the reins of the European selection, a captain who will go down in history, for having worked to hold this edition on the European continent, and for the brilliance with which he will have led his team to victory.

En the end of 2008, and while the next two editions played in Europe had already been awarded to Wales and Scotland in 2010 and 2014, Ryder Cup Europe representatives announced their intention to play the 2018 edition on the European continent. Germany, Sweden, Portugal, the Netherlands, Madrid and France then declared themselves candidates. France, whose file was carried by the French Golf Federation, had chosen to formalize its candidacy file on April 29 for the Senate.
On May 17, 2011, Ryder Cup Europe announced that France would be the host country for the 2018 Ryder Cup.

The French in Ryder Cup

John Van de Velde was the first Frenchman selected in the Ryder Cup in 1999.
Thomas levet was the first French member of a European team to win, in 2004.
In 2014, during the last European edition, Victor Dubuisson took over from its elders with a new victory for Europe. 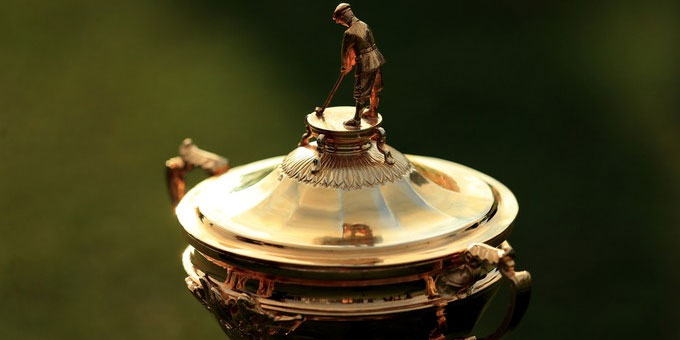 The Europe v United States counters show 13 wins to 26.
In September, the Americans will try to sign their first away victory since 1993 ...

Come to the Ryder Cup

>> For any questions, contact the Ryder Cup Europe ticketing team at the following email address: rydercuptickets@europeantour.com

What mode of transport

No pedestrian access to Golf National. Free shuttle service from stations and relay parks for all holders of a Ryder ticket of the day.

Subscribe to the Swing-Féminin newsletter to not miss any golf news!

AIG Women's Open: the ticket office is open!
The DP World Tour launches a new Metaverse challenge
Sport Passion Trophy: the results of the 2022 edition
Fairways magazine at 18!
Golf de Vitré is looking for a buyer
Aréas Assurances and Aiac partners of the FFGolf
Cameron Smith takes the lead in the Tournament of Champions
Golfy, sponsor of the new Easy Driver program, on Golf +
PGA Tour to stop testing for COVID-19 from July
Korn Ferry Tour: brawl breaks out during qualifying round 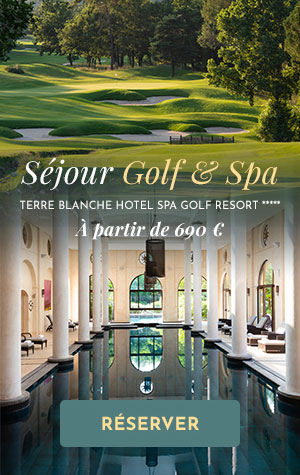 We collect anonymous data for purely analytical purposes and use cookies to track and improve your use of the site.
By continuing your navigation, we consider that you accept these provisions without any reservation.
I agree  Discover more
Privacy & Cookies Policy